How are you today?

I had a pretty busy and hard day...but I found the necessary time to do a review I've been so eager to do!
I am going to present 2 stamping plates I recieved from Moyou Nails(link HERE). I really think this is going to be the most elaborate review I did until now because I am going to talk abou the plates, the scraper and also the stamper.
It will be a long post so please be patient.

What can I tel you about MoyouNails?
They were founded in March 2009 in London, UK , there are over 750 designs that can be stamped with they stamping plates and you can find their products in Hamley toy stores.
They also have nail polishes and nail accessories so you don't have to stick to the stamping plates.

Let's cut to the chase. In the package I recevied there were: 1 stamp, 1 scraper and 2 stamping plates I choose. (see photo bellow) 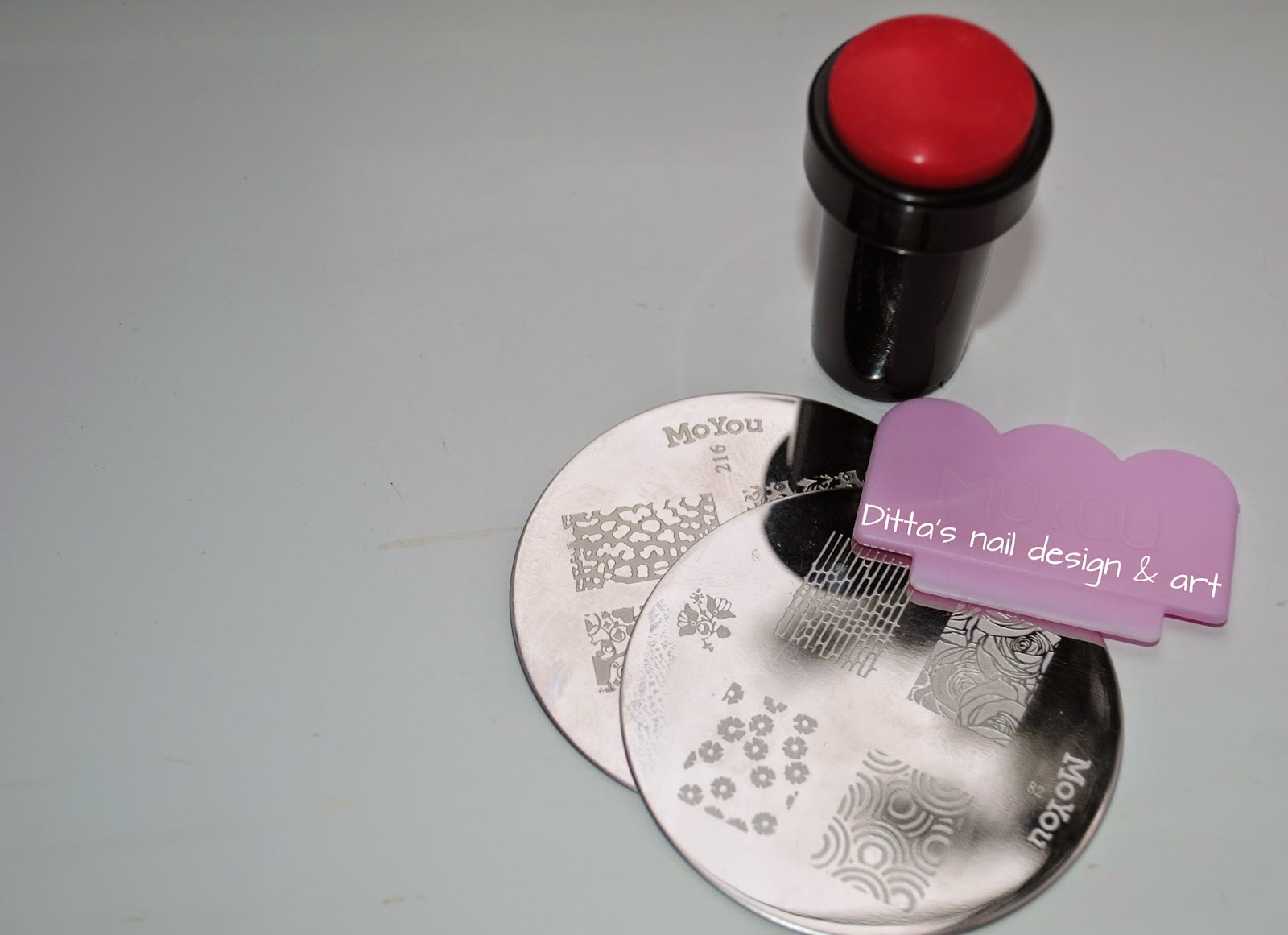 The scraper is made out of a pink plastic and it has write Moyou on it. It's not to much to talk about. 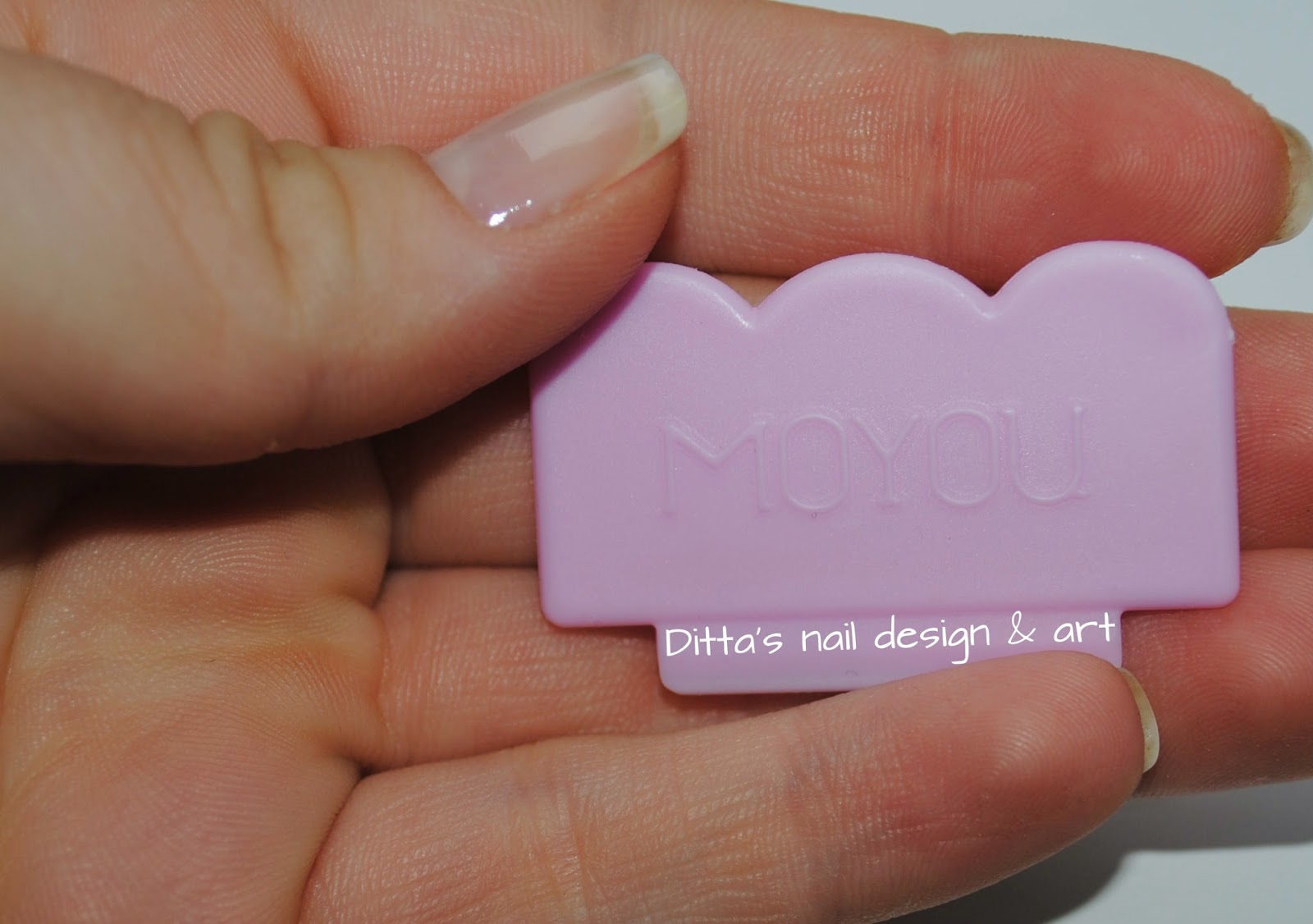 If I couldn't talk much about the scraper I will about the stamper.
First of all, I want to show you the stamper I used until now. It's a no name one for which I payed less than 1$.( It was a pack: stamping plate, scraper and stamper) - since I was so pro I decided to buy something cheap so I could learn how to use it.

As you can see it's the typical stamper you can find on the market, in any store at the subway.
Since I used the one from MoyouNails I can tell you that is a lot harder to handle because it's too short. Being the only one I had I did my job with it(but now I wouldn't use it again).
You can see a design I did using this stamper HERE 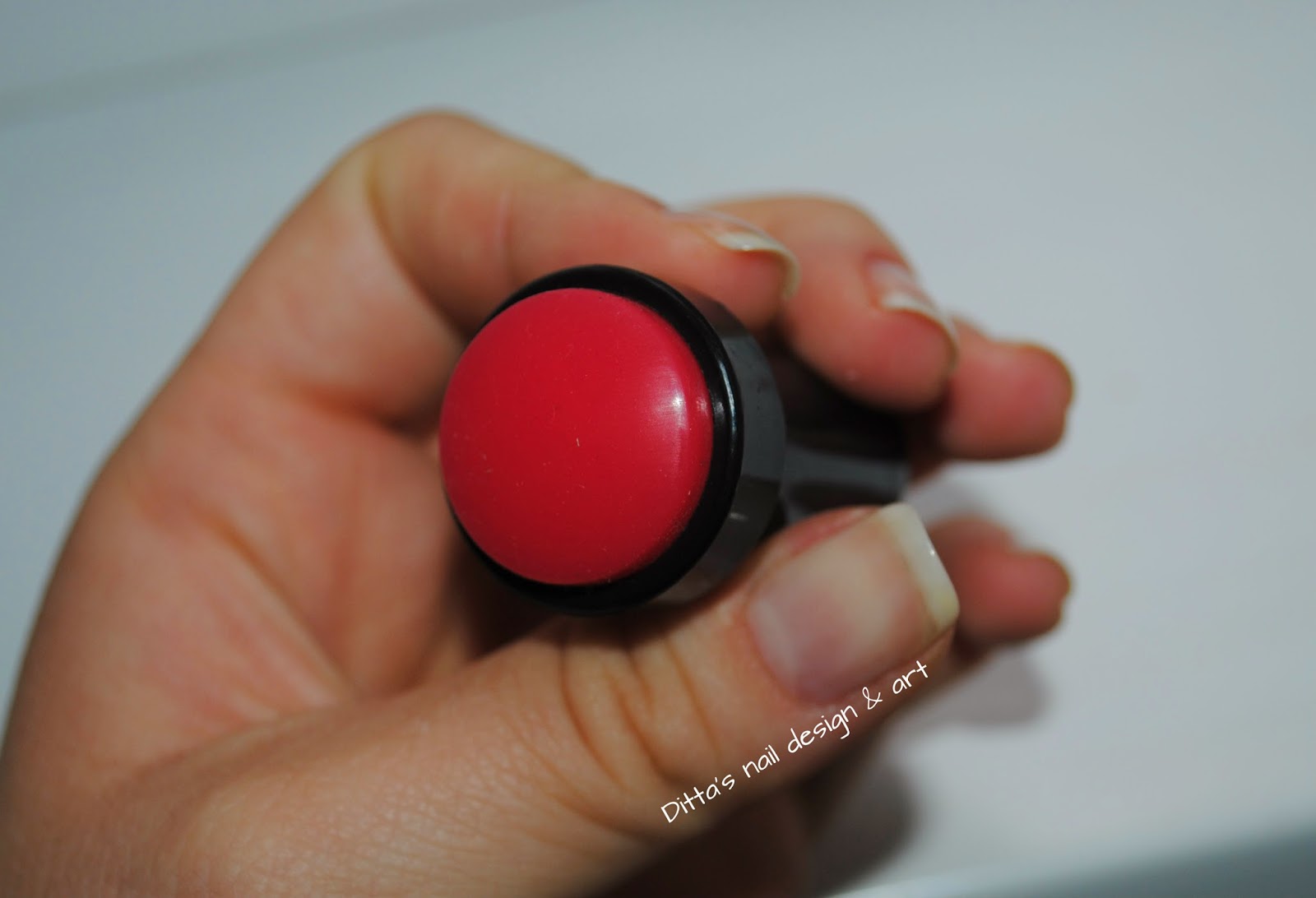 Now, about the stamper I recieved from MoyouNails. The first thing you can see it's different is the colour. (red silicone tip and the black body).
The stamper itself is a lot bigger...i think it's double the size of the one I had, fact that makes it a lot easyer to use.
Another thing that is different ...is the size and the texture of the silicone.The one I had it's very hard while the other one is soft and puffy. It's a lot easyer to roll it on your nail. I absolutely love that. 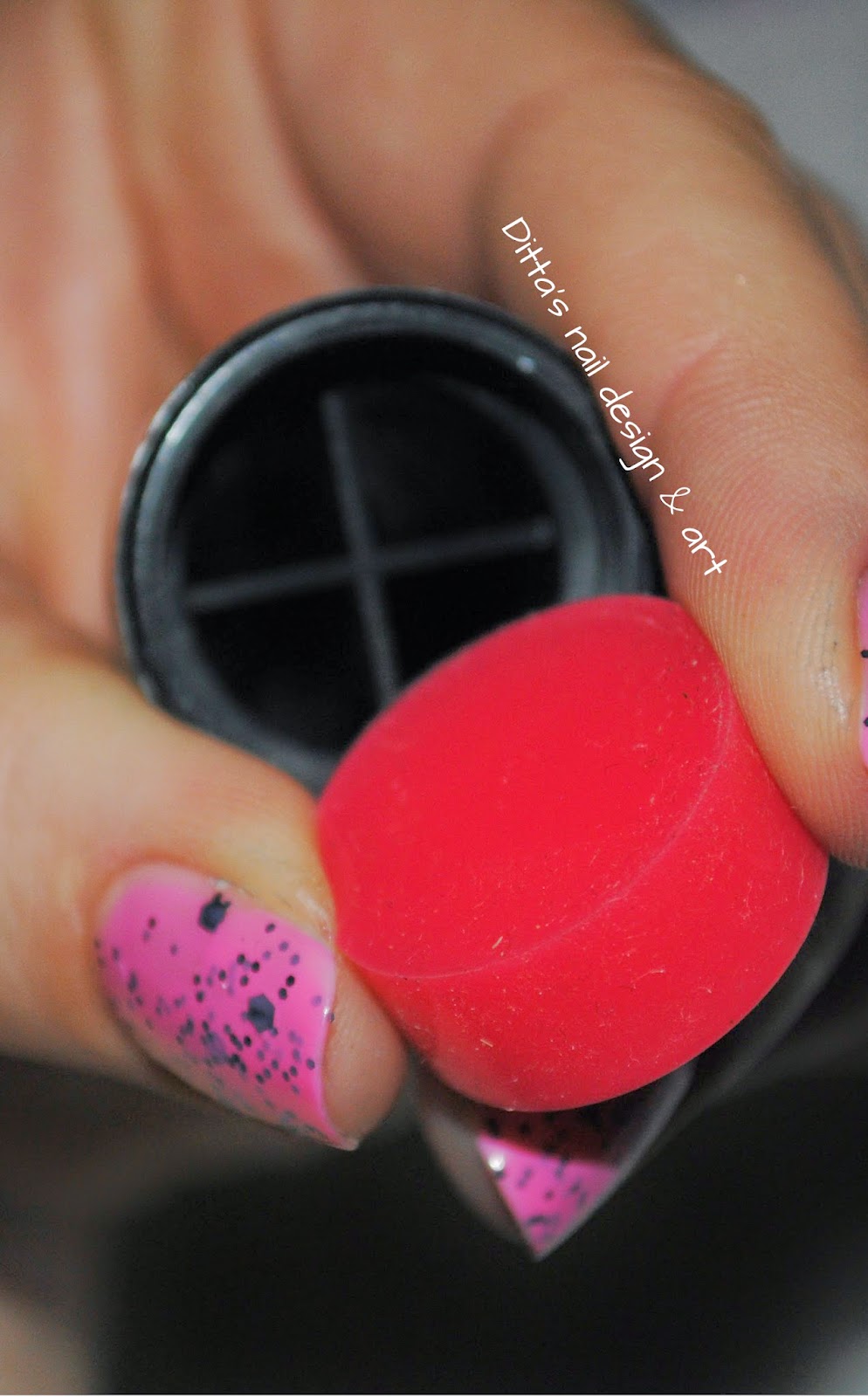 The last thing I am going to tell you about the stamper I recieved it's something special.
When I opened the package I saw the head separated from the body (how horror does that sound??)
I thought that it was broken...but since I am like a little handyman I said "no problem" and thought of ways to 'fix it' , but before I did that, I sent an email to the company and told them I had recieved the package and also complained that it was broken.
The lady was really nice and explained to me that it wasn't broken but it's the way they make them so you could clean them a lot easyer. I was really excited when I read what she told me...because I think it's a great idea. However, the head stays where it's supposed to, so no worries it's not going anywhere.
These being said...I think we can pass to the stamping plates. 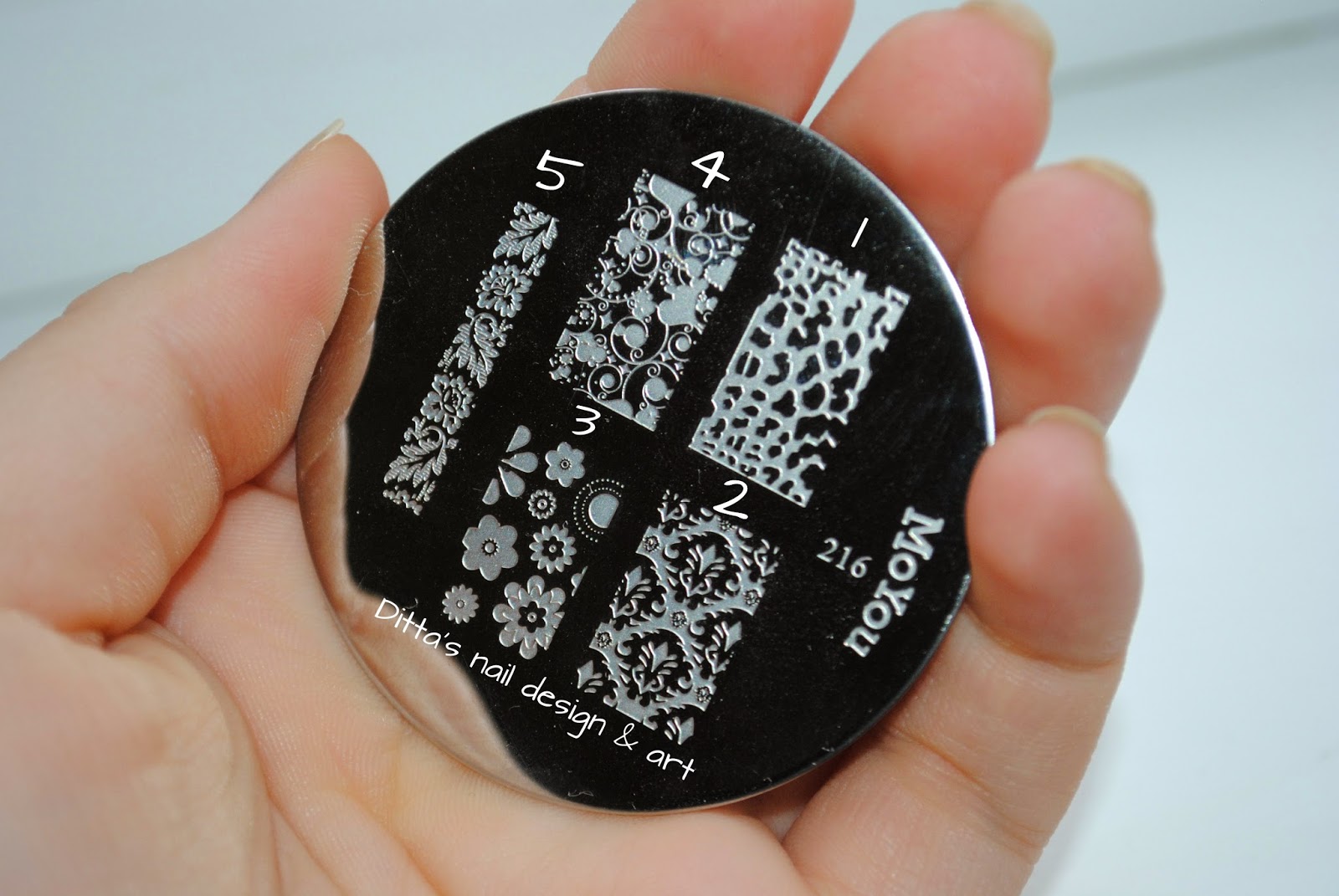 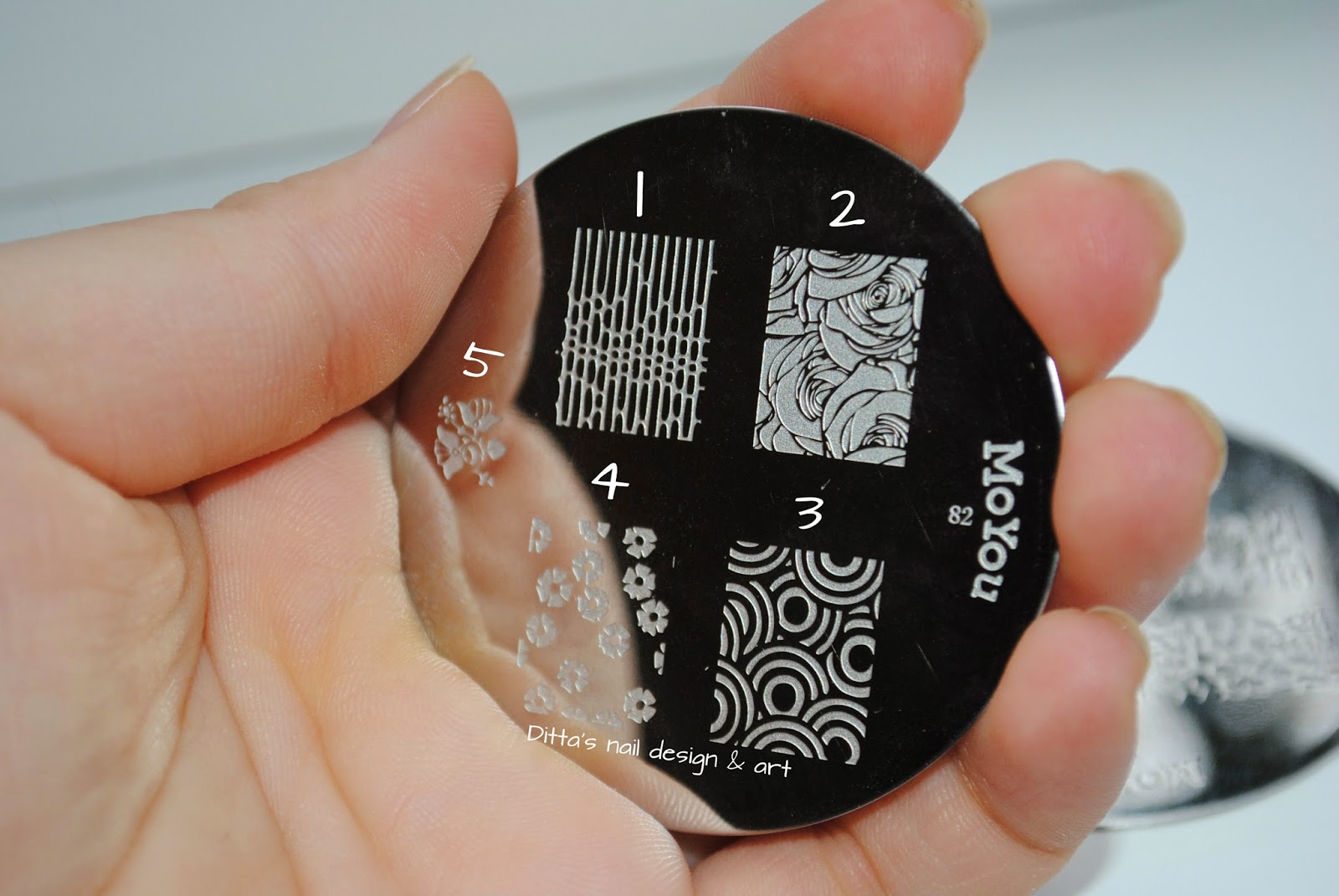 Even though I know for sure I want full-size nail designs on the stamping plates, as you can guess, I still had a hard time choosing my plates.
The big amount of different and gorgeous designs makes it very hard for you to choose something.
I finally decided to pick no.216 and no.82. They both have abstract and flowery designs which in my opinion is perfect.
The plates are very well engraved.( you can feel the design when running your fingers over it)

The first thing I noticed about the plate no.216 it's that the designs are more longer than wider and as you can see that's not the case on the other one->
I was a bit sceptical at first because my nails are a bit wider  and I thought it won't cover the whole nail...but to my surprize, I was wrong. Due to the quality of the stamper the design transfered perfectly on the nail.


For the designs I decided to use 4 different colours.
I used Maybelline-Colorama no.103 as a basecoat and for the stamping GoldenRose RichColour no.44. ( for the first plate)

I think this combination is really nice because the contrast is high.
I recently found out from one of my friends that GoldenRose RichColour work perfectly for stamping and I was curious to try.
I will now show you what I did.
I had some problems with the design no.4 because it wouldn't stick to the stamper. I managed to do it after 3-4 times. 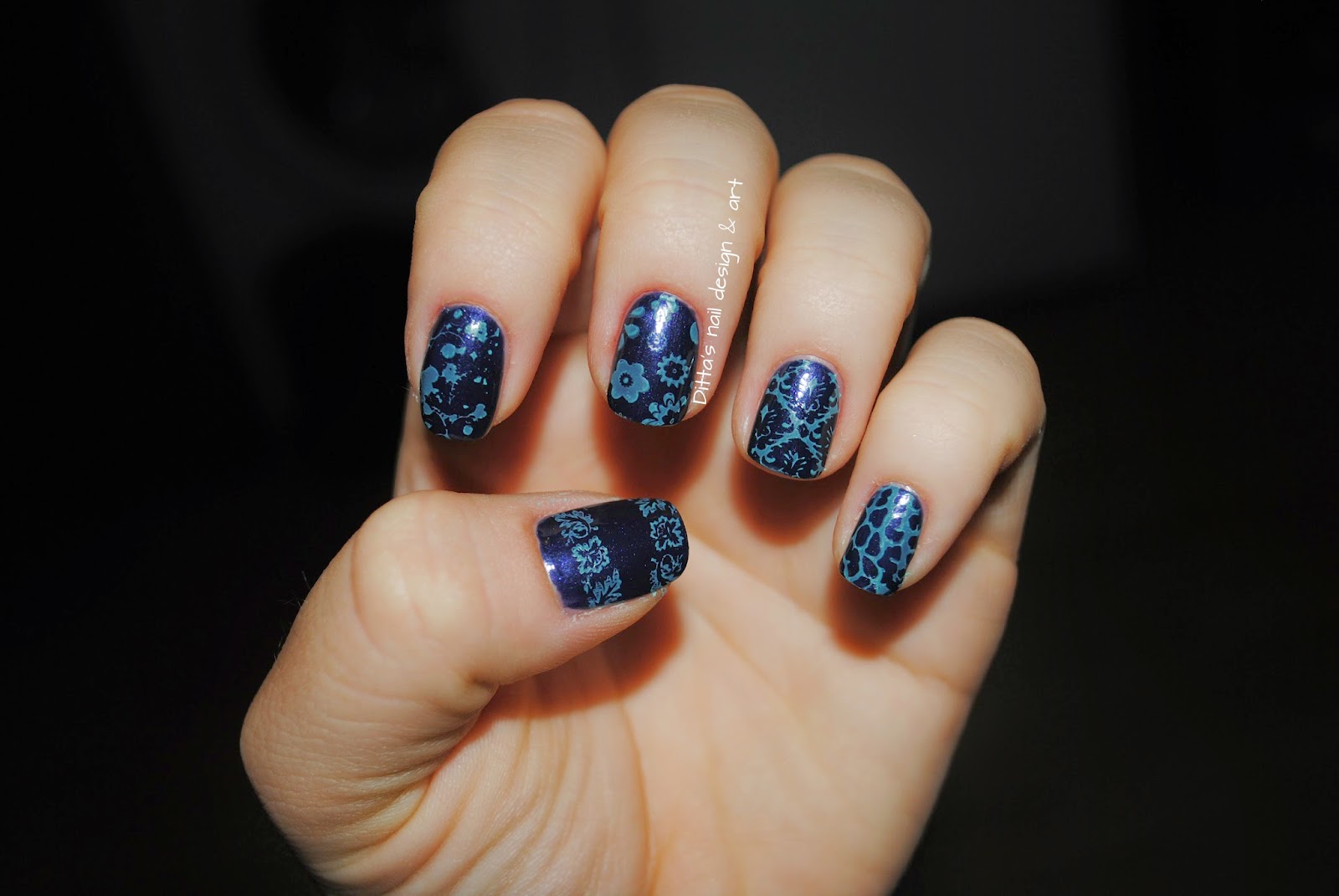 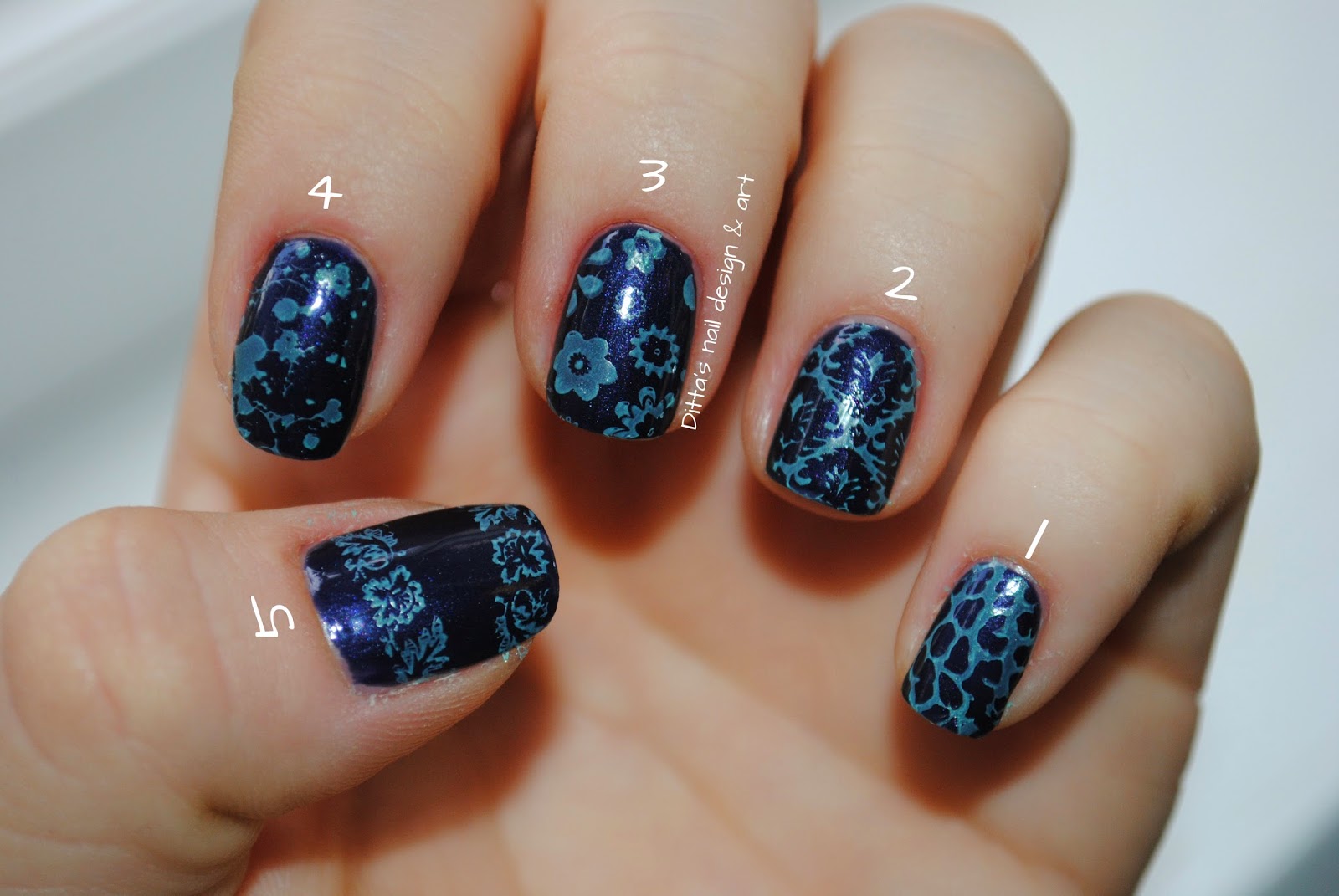 My personal fav is no.3. ( I think I will use it soon on a design for the Alphabet Challenge)
Bellow I am going to show you some close-ups: 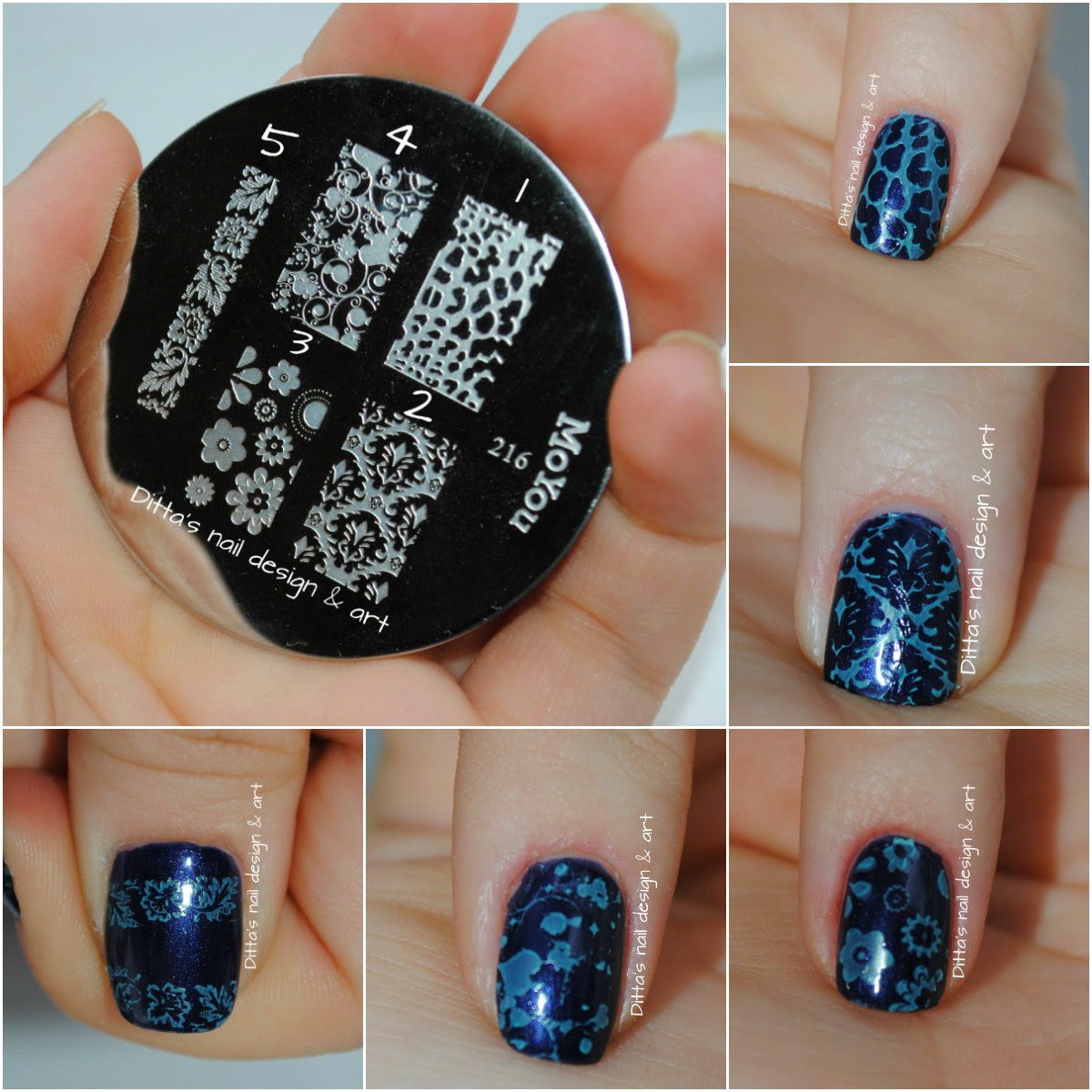 For the other stamping plate I use S-he Stylezone no.312 and a no-name one for the stamping.

I chose this colours because I thought the design will pop-out.
With this stamping plate I had some trouble with the design no.1 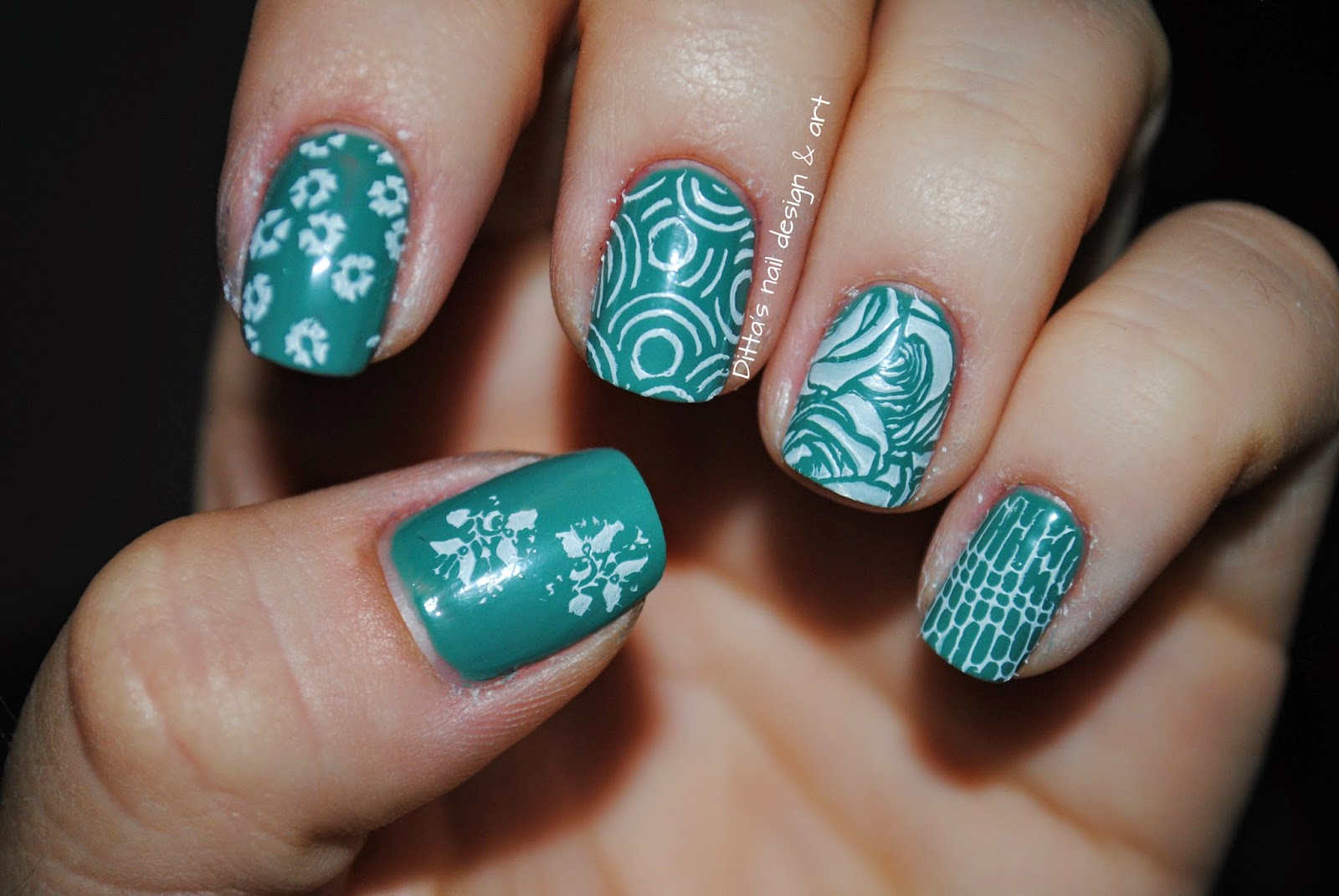 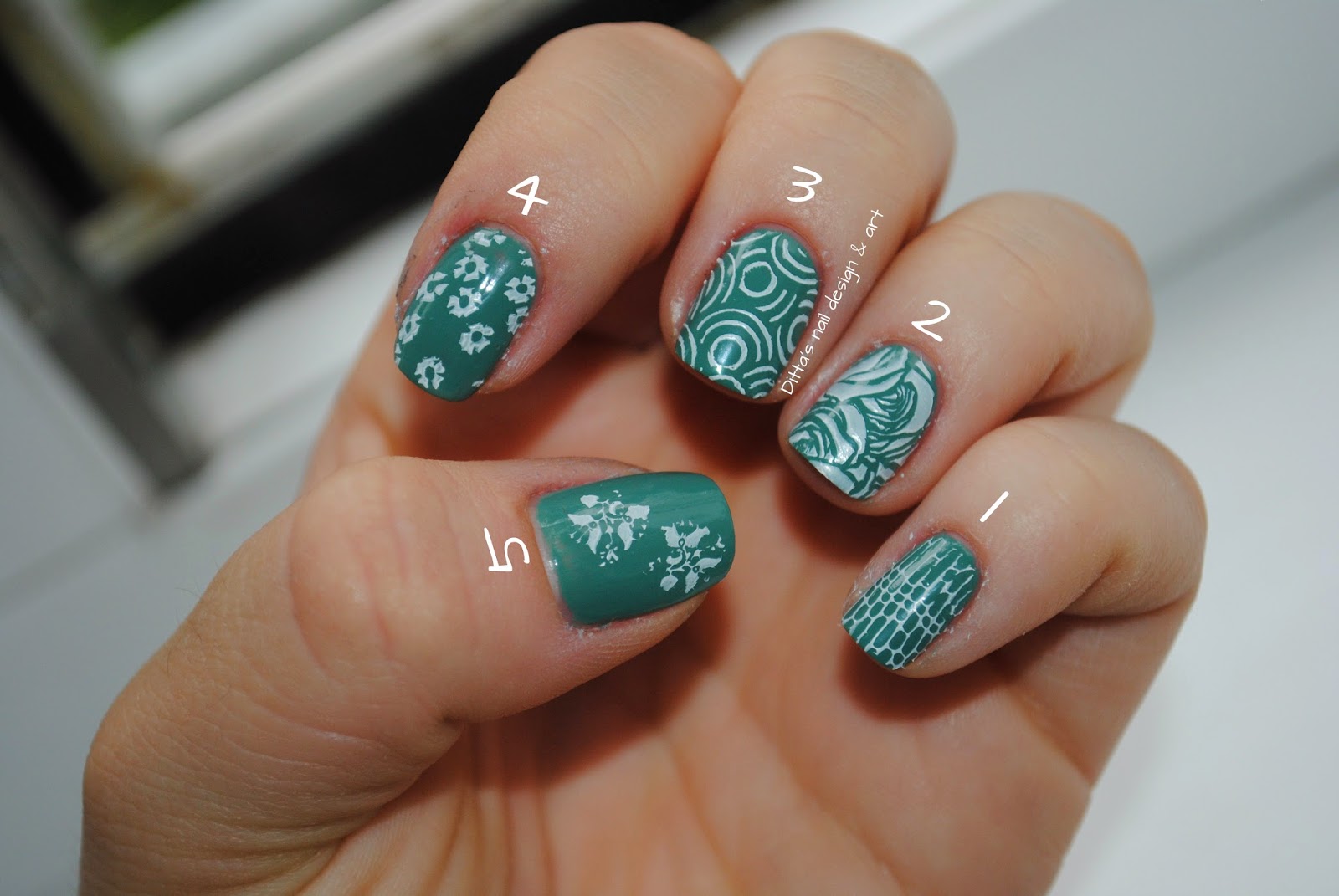 On this stamping plate I have 2 favs: no.2 and no.3
Here are the close-ups: 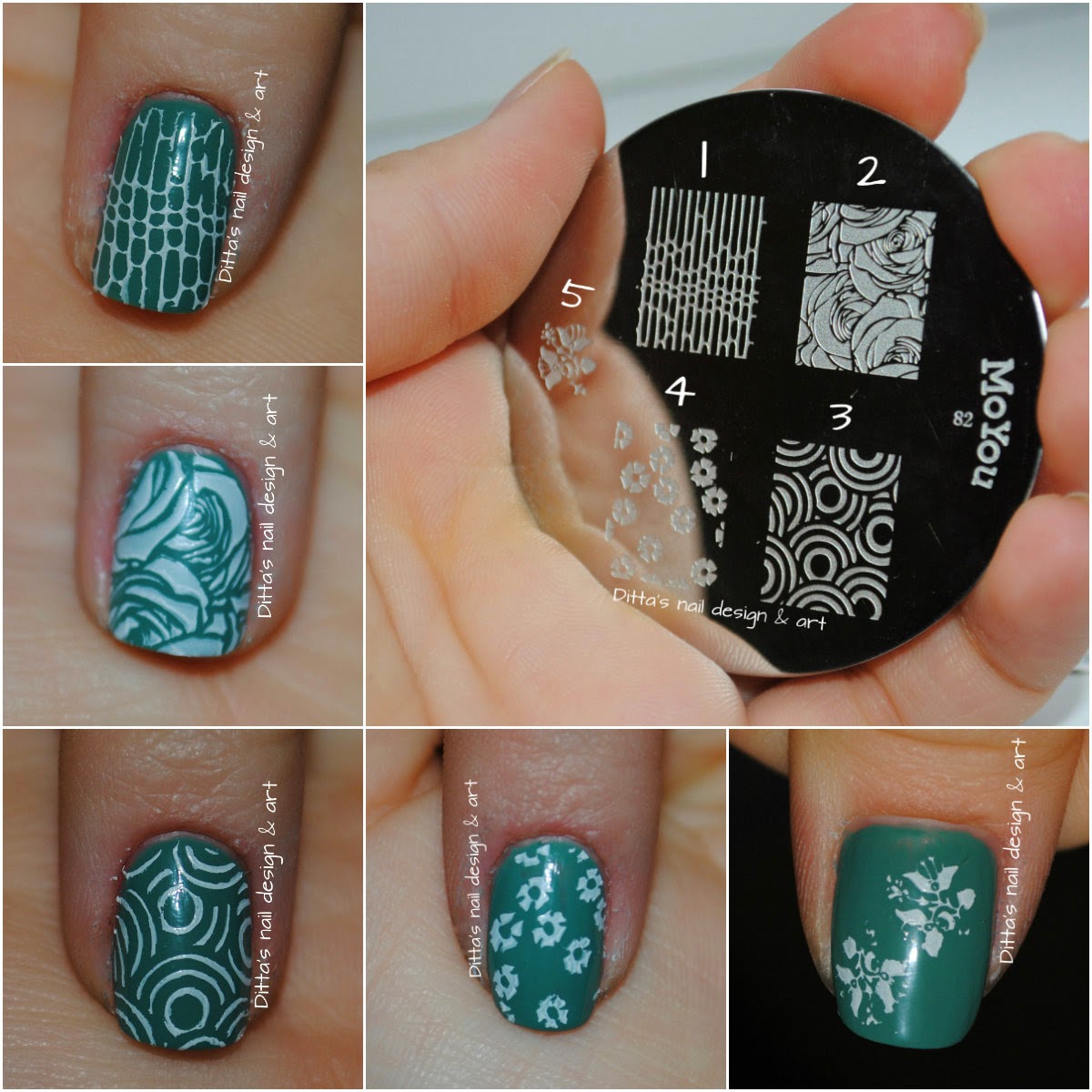 I hope you liked my review and also that you had the patience to read it all.
To conclude I am going to say that the stamping plates and especially the stamper, are amazing! I love them. I will use them as often as I can :)
I would absolutely say they are worth buying!
Here's one last time the link to MoyouNails site: http://moyounails.com/

Until the next time: KISSES.
Posted by Unknown at 23:15

The face behind the nails. 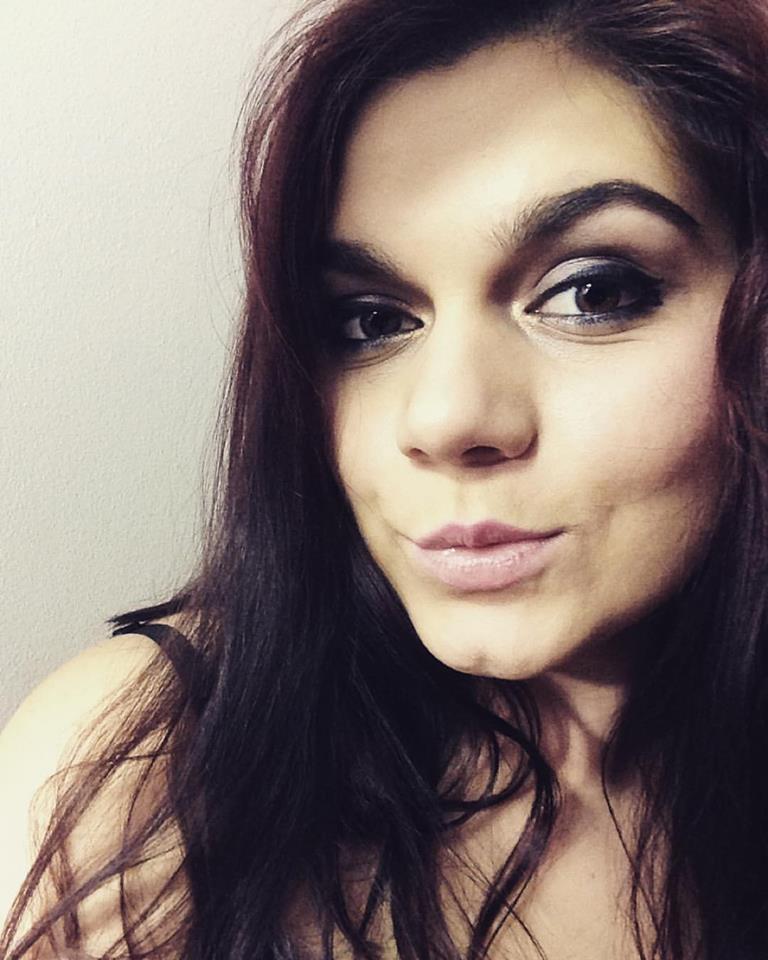 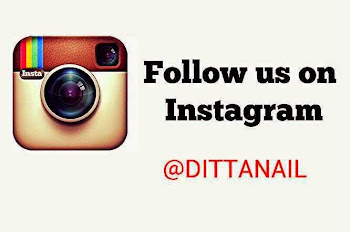 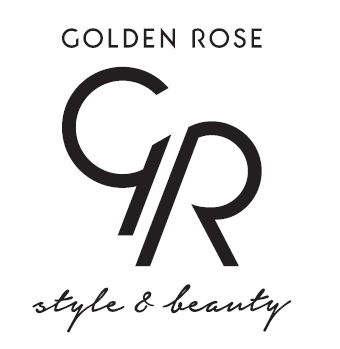 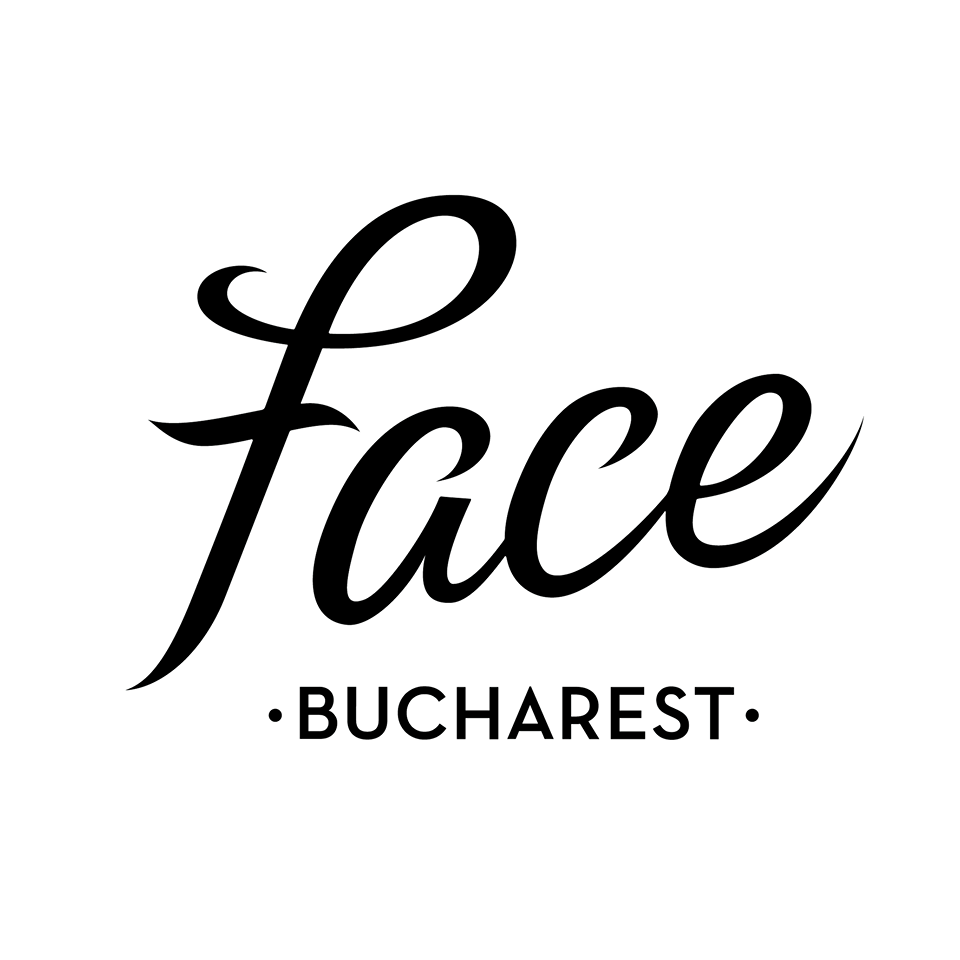 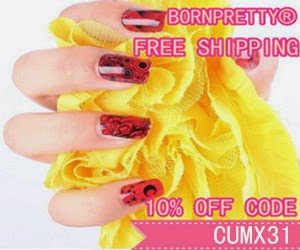 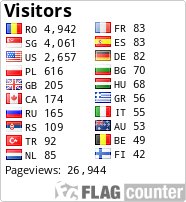 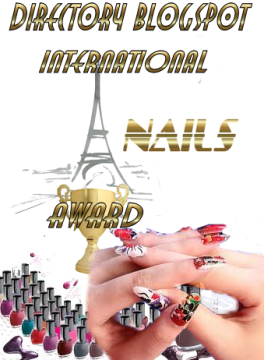